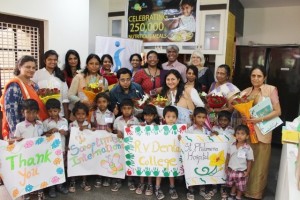 AlphaBet Club’s initiative in doing a thorough medical checkup for the students of Freesia and Gardenia Schools showed a lot of interest by various NGOs in Bangalore.  We are happy to share with ABC community that a very successful medical camp was conducted on March 18th in Freesia School by Soroptimist International (SI) Bangalore.  ABC is extremely proud to mention that all the partners i.e., ABC, Building Blocks (BB) and SI Bangalore that came together for this are all Bangalore Effective Education Task Force (BEETF) partners that share the same vision of providing education for the underprivileged kids of Bangalore.  Through the effective and large network of BEETF, these partners were able to leverage the synergies and create this wonderful project for the students of BB.  SI Bangalore very articulately collaborated this camp with a team of eight dentists from … Read more »

AlphaBet Club’s takes pride with its initiative in organizing a medical checkup for the students of Building Blocks (BB) Schools.  We are excited to share this with ABC community that a very successful health camp was conducted on March 10th in Bluebells School by the Lions Club, HSR Layout, Bangalore.  Also, ABC is extremely proud to mention that a very thorough checkup on the three important aspects of primary health was covered in this camp.  Lions club with its esteem partnership with Narayana Multispecialty Hospital, HSR (A unit of Narayana Hrudayalaya ltd) along with other partners from Axiss Dental and Sankalpa Eye Hospital conducted this camp for 150+ children aged between 3-10 yrs.

It was overwhelming to see the children very enthusiastic to see the doctors and allow them for diagnosis.  We are happy that for the first time we have been … Read more » 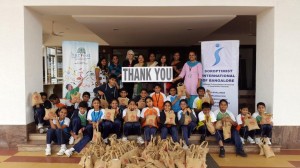 A few years ago SI Bangalore, started a very unique project under the name ‘Fistful of Rice’.  This program is inspired by an initiative earlier run by International Children’s Peace Council designed by Dr. Nandini Mundkur who is a renowned consultant in child development and also a member of SI Bangalore.  This program was modified as ‘Fistful of Nutrition’ later on by SI Bangalore. ‘Fistful of Nutrition’ is aimed at fighting malnutrition among the children of deprived class in our society.  Under this project SI collected lentils like Moong Dal (green gram) which is a high source of protein and rice which is the staple food in Southern India. Children of elite Schools were given eco-friendly jute bags to carry home for a … Read more »

The welcome and hospitality at the school and in the slum was overwhelming with lots of tiny handshakes, hugs and ‘high fives’. To see the school and the environment where these children grow up makes it clear that the education- and nutrition projects at Edelweiss school are making a huge difference to change these children’s lives. A very memorable day! 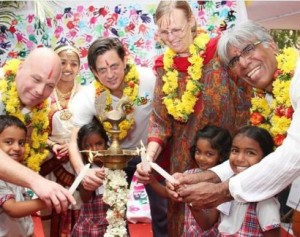 Today we celebrated the Opening of our New GARDENIA School for 40 to 60 three to five year old children living in the DJ Halli Slums in Bangalore. This is AlphaBet Club’s 5th School project…. a great milestone!

We like to thank and compliment our partners DNF, Casa Foundation and Building Blocks for the great cooperation and an amazing job. Congratulations with a beautiful new school!

On behalf of the children and their parents….
Thanks to all ABC donors, sponsors and friends! And Last but not least a big THANK YOU to all ABC Ambassadors/volunteers in Amsterdam, Madrid and Phoenix. Without your effort and support this would not be possible!

Holi – The festival of colors at Edelweiss School, Bangalore 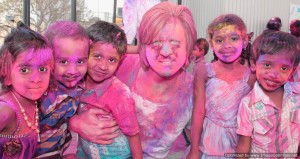 Holi – Festival of colors signifying the arrival of spring and its bounty of freshness with colours was celebrated with exuberance with friends and visitors at Edelweiss.  Children had a fun filled, colorful and a playful holi celebration. 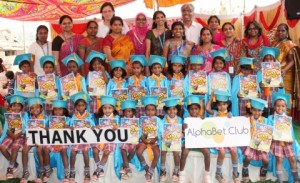 As the new year is upon us, this is the time of the year to reflect on what we accomplished in 2014. For us that means looking back on the ABC charity projects in India, the improvements in our organization and the 12 [FUN]draising events in Amsterdam, Madrid and by our recently launched Phoenix chapter.

I’m happy to share that 2014, with your support, the AlphaBet Club:

Handing out teddy bears in Whitefield 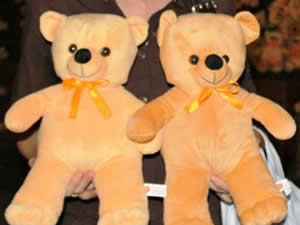 What an amazing day! Singing, dancing, jolly phonics, graduations, awards, smiles, lunch, and with sincere thanks to ABC bangalore, lots and lots of teddies. Special thanks to Erica, Cecelia, Holly, and Cynthia who celebrated with us and the many supporters who were there in spirit, or their bear was.

Thanks all for joining us at the launch of AlphaBet Club Bangalore! After years of throwing fun events focused on connecting the international community in cities around Europe… the AlphaBet Club threw their inaugural event in Bangalore on Sunday, April 15 at Amnesia & Poolside, Chancery Pavilion Hotel.

With your help, ABC has given away 338 Care Kits 3 to 5 year old students that attend Building Blocks Schools and live in slum in Bangalore. Each Care Kit contains a Teddy Bear, Medical Check Up and Individual Photo of each child. We’ve also be displayed 100 photos taken by 7 Photographers of the pre-school we opened in Bangalore in 2010.