With 90% attendance and school in operation for 24 days, February month has progressed very well academically!  Children are reviewing concepts learned in the beginning of the year and preparing them for assessments that are due in the month of March. K3 and K4 also had a second round of assessment in all the schools. Social workers are busy with house visits for new enrollment in K3 for the next academic year. 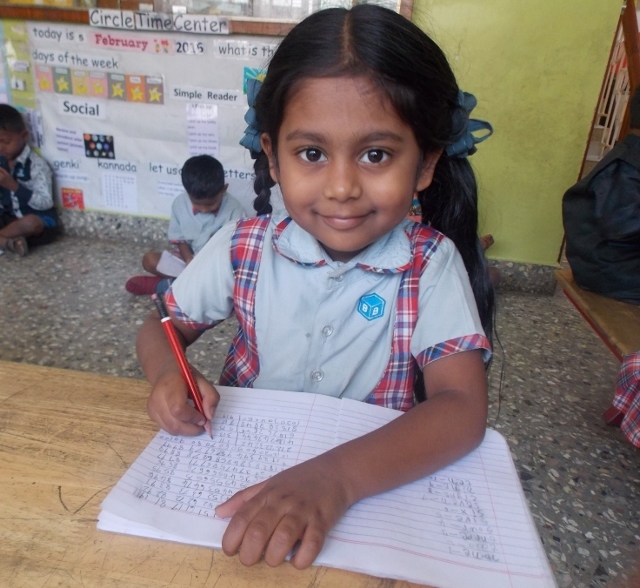 Patterns was the theme of the month for K3.  Many activities related to patterns like – twin towers, what comes next?, paper pattern chains were conducted for children. Visual recognition of even and odd numbers from 1 to 10 was shown to them in a new way.

K5 continued learning to count orally from 1 to 100, counting numbers in multiples of 2’s, 5’s and 10’s was repeated and identifying even, odd and missing numbers from 1 to 100 was practiced during this month.  Also children practiced writing number names from 1 to 20.  A lot of practice problems were given for addition and subtraction concepts 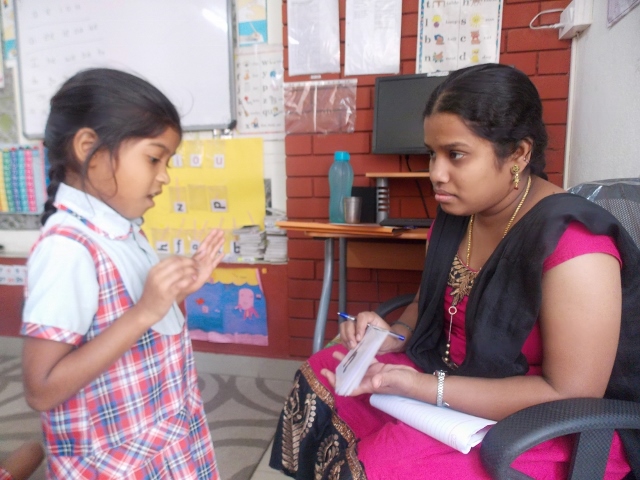 K3 this month learned sounds of the letters h and s with the help of story, action and formation.  K3 has progressed into blending sounds to read words. 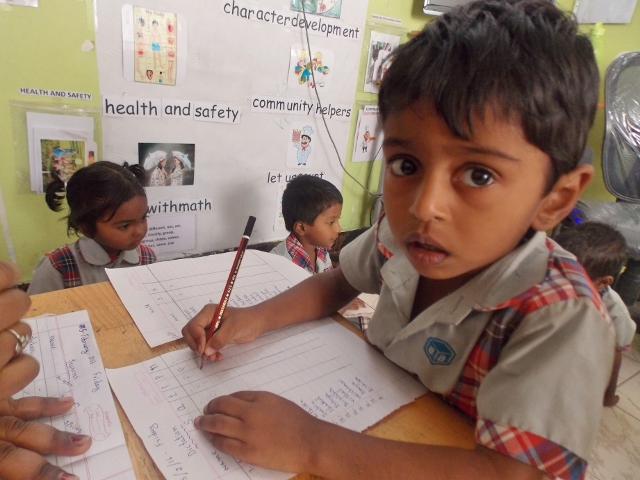 K4 learned the short vowel sounds of the vowels. They continued writing letters from a to z. Tricky words like I, he, me, be, we, to, do, go, no and so were taught to them.  High frequency words like a, in, of, it, on, is, at, up, all and us were covered during the month.

K5 reviewed and wrote all the letters of Kannada Language Alphabet that they have learned so far.

K3 children focused on learning on “My Body” with activities, educational charts and games to identify body parts.

K4 children learned about the animals in the Savanna forest, desert land and tundra region of the arctic.

Both K4 and K5 has some moral based story telling sessions by their teachers on the stories – ‘Pig in the pond, Have you seen the Crocodile? Oliver’s fruits salad and Ten seeds’. 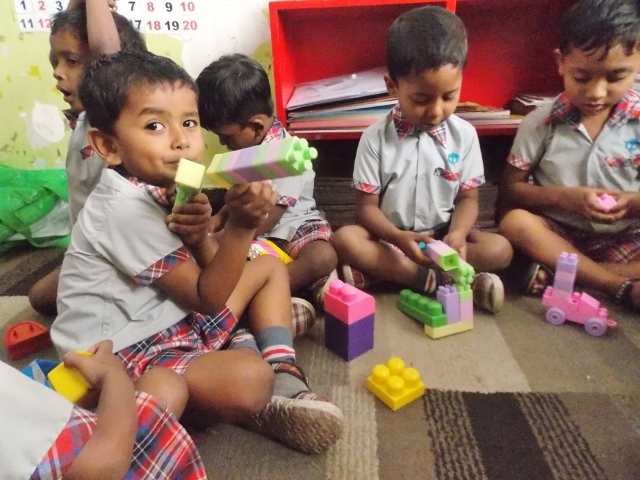 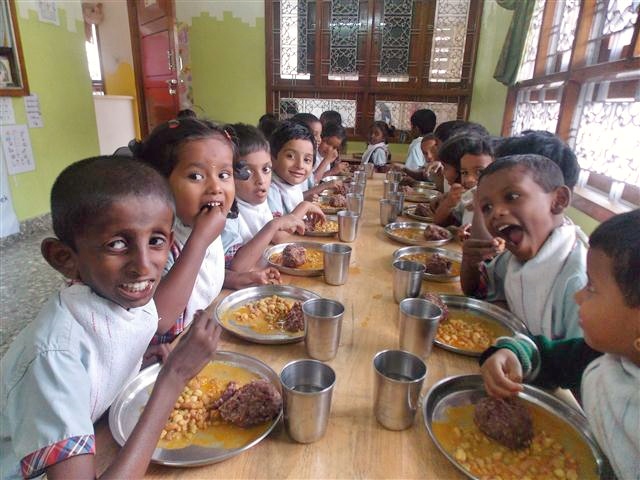 Well balanced nutritious meals were prepared and served every day.  Children were served with breakfast and lunch on all working days.  A total of 4,751 meals were served for our children 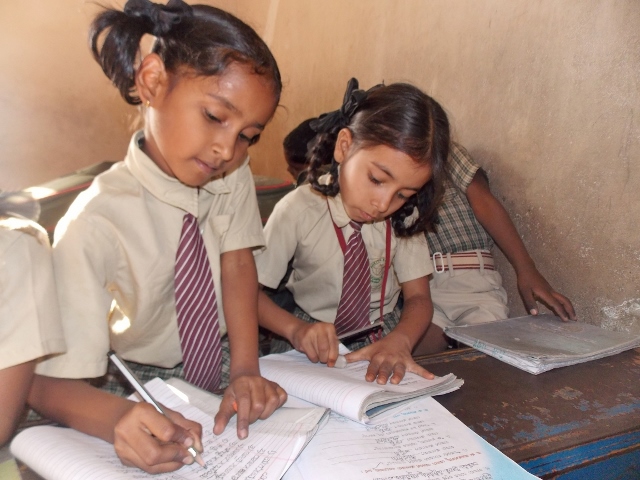 With a total of 36 students of grades 1, 2, 3 and 4 the ASP program is going well.  This program helps the students in the evening by supplementing their studies with extra help in their schoolwork and assistance in completing their homework.  This program is a supportive program which assists our previous graduates to keep up with their school work.  This month the program ran for 16 days with a total attendance of 534 children.  ABC provides evening snacks in the After School Program.

IInd assessment for K3 and K4 children was completed in all schools this month. This was the feedback from the academic supervisors for the Edelweiss School:

K3 children need to work on English and Math concepts and also on recognizing and telling what’s on the visual cards.

K4 children are weak in phonic sounds, blending, segmenting and overall concepts.  Work is not neat and need to improve on it.

Darshini celebrated her birthday with her friends 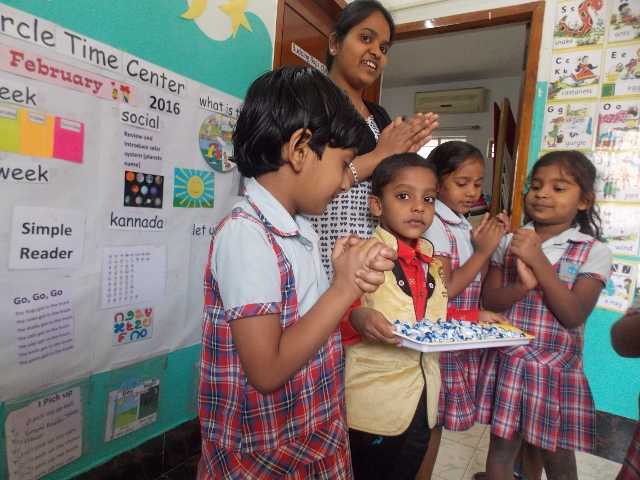 Abu Thaheer celebrated his birthday with his friends.

Birthdays are special for everyone.  Children express great joy in celebrating their birthday with their friends! This month Vaishnavi, Anuradha, Darshini, Abu Thaheer and Sanjay’s birthday was celebrated in school.  Here are a few pictures from the birthday celebrations.

New admissions for next academic year is in progress.  Social workers along with the school admin are visiting the slums and selecting students for K3 admission for next year.